A Two Million dollar dime, I want one! 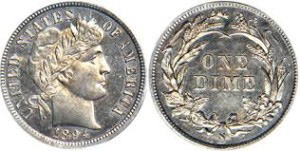 But the key part of this is it is not just any dime. It is a 1894-S Barber dime. A dime, designed by United States Bureau of the Mint Chief Engraver Charles E. Barber.  It was made in San Francisco in 1894 (122 years ago). This is one of the Big Kahuna coins in the US coin game. Why you ask, well human nature.

In 1894 the superintendent of the San Francisco Mint J. Daggett  made a special strike of this dime for his banker friends, 24 proof coins. Then he game most of them to said friends, giving a few to his daughter. Unlike other strikes made at some mints, Daggett did report these dimes as being made, showing up at $2.40 in the annual report. Now the CNN Money story will say that more were made, but they are wrong, so just let that dog lie!

So as you can imagine, with only 24 being made, they qualify as rare coins. There are only 9 know at this time, in collections. Where the other 15 are is unknown. so yes you may have one of them, but you may also win the power ball that is over 1 billion right now. In fact so many people want to know what happened to the other ones, that Heritage auction is offering $10,000 reward to anyone who beings them one, just to verify its authenticity. ” You will get $10,000 just for letting us see the piece and authenticate it,” said Mark Borckardt, senior numismatist at Heritage Auctions.

Some would call them the great white buffalo of the coin world. If you had one of the 1894-S, please call me.